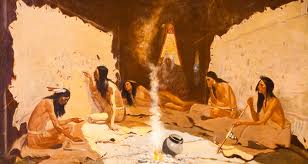 Have you ever had one of those weeks when life becomes not so much about how you deal with stress triggers, as much as  that the bastard triggers seem to be doing 3000 rounds per minute, M134 Gatling gun style?

In such cases it’s normal to exhaust the usual coping mechanisms before the body decides to shut down.  Mine decided to shut up shop on its monthly special lady’s delivery of PMS etc. Once the initial panic subsided and blood tests confirmed there were no mitigating reasons another kind of delivery would take place 9 months later, I took myself to the gym, in attempts to chill out.

How is my intensive exercising since joining the gym this past week going? (i hear you not ask ..) Well, I’ll tell you cause it’s freakin’ awesome! It has been a particular combination that has suddenly made it so.

Gym as a transcendental experience.

Not just the usual rush of endorphins or even the claim along the popular lines of “I feel better knowing I’m doing something to be healthier or fitter”.

After the usual cardio warm up of 20 min (treadmill & stepper machine), 100 reps on various leg weights machines, 50 reps on various arm weights machines, 100 reps on 4 different types of abdominal routines, and then another 20min of cardio on the elliptical and treadmill, I felt sufficiently springy in my step with the predictable endorphins rushing around telling me all this temporary pain was worthwhile. But I wasn’t ready yet to go home.

I looked down from the gym floor onto the pool arena below and contemplated going for a swim as that might relax/exhaust me.  Only problem was, I can’t swim very well and I hate swimming.

Half way down the stair case I remembered they have a sauna. Perhaps 10min there prior to swimming could be interesting.  I’ve never used a sauna, so this was a loose theory which may have had more to do with procrastinating the actual swim.

I walked past to make sure there were no creepy men in there and only saw a few elderly chinese women.  So I ventured in.

10 min later I was hot but still not sweating. Drinking plenty of fluids yet wondering if I indeed had pores.

A big middle aged man came in. smiling.  Not cool at all dude. This potentially creepy figure of a man erroneously tried to make chit chat. I managed to dismiss him by giving him a look of bored contempt I hadn’t given anyone since I was 16 yrs old.

The elderly chinese ladies’ approval was punctuated by their silent pause, to what had been an unceasing flow in Mandarin, from the moment when I didn’t answer his questions regarding my day. In such awkwardness he promptly left the sauna. Seriously, this was so not the place to make friendly advances! Get a clue! In that solidarity of safe sisterhood, I continued to sweat it out.

Rambling thoughts attempted to take rank in my head, like customers at a Starbucks cue with urgent orders for a complicated beverage claiming to be coffee.

Which of the past week’s issues should I or could I deal with first? and how?

I had no answers.

I merely offered up questions to the Greater Spirit in the sky in return for a sparkle of truth which might serve as a guiding star in the upcoming days or weeks.

I stopped trying to figure anything out and as my muscles surrendered, I felt the tension ease up, I too let go of the need to know.

Time seemed to slow down. The natural light filtered into the steam room on soft glowing rays.  I looked at my skin, entranced with the enormous sweat droplets now populating the surface…

Somewhere in between these intangible moments, words of wisdom surfaced through.

For each of the questions I had wrestled with earlier, clarity was gifted in return.  If not the vision of an exact action to take, then the emotion, attitude, or energy necessary to bring to that situation and then deal with it.

There had been no chanupa aka “peace pipe” passed around yet I felt cleansed not only of my former physical tension but of any emotional tensions too.  35 Minutes after entering, I was ready to emerge renewed. I walked peacefully into the gentle water therapy pool immediately outside the sauna and simply walked from one end to the other slowly.  Floated and played with the water through my fingers, none of which had any urge to swim.

This brings me back to the reason for this blog posting, and my wish to share the unexpected, unadvertised healing effects of contemplation in a sauna, which one may not expect when signing up to a gym as it had nothing to do with weight loss, fitness, physical self esteem or any of the usual reasons for going to the gym.

I think the Native Americans may have been onto something powerful with their concept of the sweat lodges and their transformative potential for rebalancing energy.

So, if you need to chill out, but more than that, chill the (expletive) out, I seriously recommend you be ready to get hot and very uncomfortable first, and let the “stone spirits” speak as the fire heats, and along with all other toxins, brings out the answers from deep within you.