It was a balmy Paris summer night.  My friend Marylene and I had just enjoyed the most exquisite afternoon sampling sumptuous treats at Angelina’s Salon du The, doing precisely what the Dauphine of France would have once recommended as the solution to all ills…. Eating Cake! This piece of advice tends to be my preferred one, at any time.

We were the last ones to leave, but once we did, we practically walked into a flyer on a post explaining there was a film shoot about to take place later that evening.   We speculated about who could be filming what movie.  The only clues on the flyer outside Hotel Le Meurice were that it was a film set in the 1920’s. The working title:  “WASP”.

Marylene said that in Paris, the city of love, anything is possible, even the most magical, seemingly unrealistic moments… through desire, imagination can manifest… so it is important to dream, to feed one’s dreams and to be patient until we can live them with our own skin….  and I have to say, in the magical realist tradition of South American literature, I believe so too.  Every minute of every day I’ve ever spent in Paris were the best ones of all my life…

So we decided to go for a walk and pass by again later.  If it was a serious film we’d stick around simply to see the production circus around it, and if not, we’d go home.

We passed by the production trucks and noticed the bright lights inside the hotel.. the lighting was ‘film set’ lighting.. so something was happening there… we decided to venture inside…Very demurely, we waited in the lounge area and the concierge even offered to take a photo of us which was very kind of him.

The magical hour of revelation was approaching.  As I’d been on production sets before, I could intuit the rhythm at which  things unfolded… it was nearly time for the cast & director to arrive… for some reason I was buzzing, I had a strong feeling we would not be disappointed.

Security was very tight along Rue de Rivoli in front of Hotel Le Meurice.  Onlookers had to do so from all the way across this wide multi-lane road.  Suddenly, crew gathered, like bees around its queen, protectively encircling 3 figures … and then we saw whose film this was, Woody Allen… and who the actor starring it was, Owen Wilson.

My top 3 directors of all time are Jean Luc Goddard, Eric Rohmer and Woody Allen.  I was delirious with joy!

We watched on with the rest of the public gathered, squinting, zooming in with our cameras, oblivious to the light rain falling on us.  After an hour, the crowd thinned somewhat, but my excitement had not waned.  I wanted to get a closer view so i told my friend to follow me.  Familiar with production sets I told her to copy my behaviour and attitude and we’d see how far we got.

Street police security let us pass.  Production crew security let us pass.   I dared to go as close to Woody as I could and stopped 2mt away from him.   I could hear his voice, see him clearly.  Occasionally he looked my way and smiled.   I have never been happier than in this moment when I could see first hand how one of my absolute favourite directors worked…   the following 2 hours, I’ll cherish forever.  It was a dream.

But in Paris, even dreams can become more magical, and just as i thought this night could not get any better, it did.

Once filming was over, production trucks once again full with production gear, 95% of the crew gone… the only people left were 3-4 crew members, a security guard, and Mr. Woody Allen & Mr. Owen Wilson themselves.

Unsure what they were waiting for, we watched them as if they were in a film, almost detached, in sheer disbelief…  when in fact they were less than 2 meters away from us… perhaps waiting for a taxi… there was no one else there.  Owen, who was calmly leaning against a pillar,  looked in our direction, smiled, seemingly ready to sign an autograph or have a picture taken with us, or even say hi… as did Woody Allen.  They were in no rush.

For the first time in my life, i was overwhelmed with .. more than shyness…utter speechlessness…as my voice was muted, my thoughts grew louder… what could i possibly say to Woody Allen that wouldn’t sound trite or fan like?  To tell him I admired his work was an understatement!  Yet here, i had the chance to say… something! anything!

My thoughts were a scramble… let me explain….  I had started watching his films 22 yrs prior to this night, the first one being Manhattan, when i was 17 yrs old.   It changed my very narrow conceptual world view and opened me up to wonderful intellectual concepts in art, history, literature, film, psychology, linguistics, music that no other single influence other than perhaps my father, had been able to do, in such a short span of time, precisely 96 minutes, the film’s duration.

Every topic, artist, concept or even unknown words like “polymorphously perverse” guided my education that year more than the yr 11 VCE subjects i was studying and all to the tunes of George Gershwin.  I started reading Chekov so I could  better appreciate his films like  Love & Death.  I started watching the European masters of cinema, to better understand his references & homages.

Thanks to Woody Allen, I fell in love with French film of the French New Wave and fell in love with Paris.  From that point, I became obsessed with studying all the great minds that had made Paris their home, and who had created any sort of art works which contributed to culture & society … Paris i realised was fertile ground for artists from all over the world, but also of course for locals to flourish!

Thanks to Woody, I decided to add film & television to my Media studies at University,  I was interested in learning film making, in his, and the French New Wave directors’ style:  Simple, naturalistic, conversational, humanistic, humorous.

It was also his neurotic sense of humour, self-effacing awkwardness that became an initial blue print for my idealised version of what i was attracted to in a man…This then led me to my first real boyfriend, who then upon breaking up, went on national television to put a curse on me, by voodoo priest who however refused to do so, in the ivory coast… ahh.. the winding road of neurosis & love… but that’s another story.

My immense appreciation for Owen Wilson, had a shorter history but was also strong.   Along with many others, I loved the comedy duo that was his talent with Ben Stiller.  His charm, his wit, his golden locks, utterly captivating!  I recalled the shock and sadness upon hearing of his heartbreaking split with Kate Hudson… and the relief that he survived the tragic attempt on his life… In person, he is even more handsome than in his films.  This also left me speechless.

There were too many things that i wanted to say to these wonderful men… too many things that i had to thank Woody Allen for.. we stood there for around 10minutes …with me almost visually crossing out everything I could have possibly said to Woody.. even a simple handshake telling him it was an honour to meet him…   so we allowed them their space, uninterrupted by these 2 women, standing bewildered or bewitched a meter away from them, as if they were a figment of the imagination.. and in the end, the most we could say to them, was nothing at all.  To this day, this silence is my 2nd greatest regret in life.

However before they got into their black taxi cab, Owen Wilson looked around, and coyly asked what time it was.  It was 12.06am….   It was midnight, in Paris. 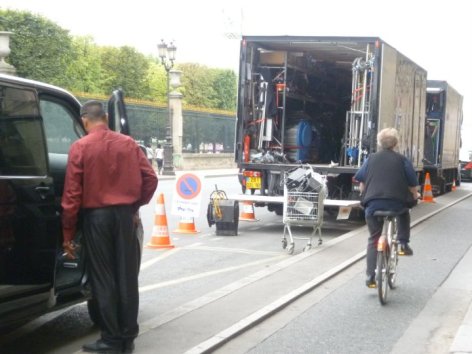 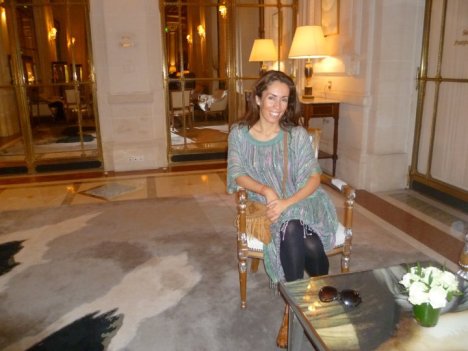 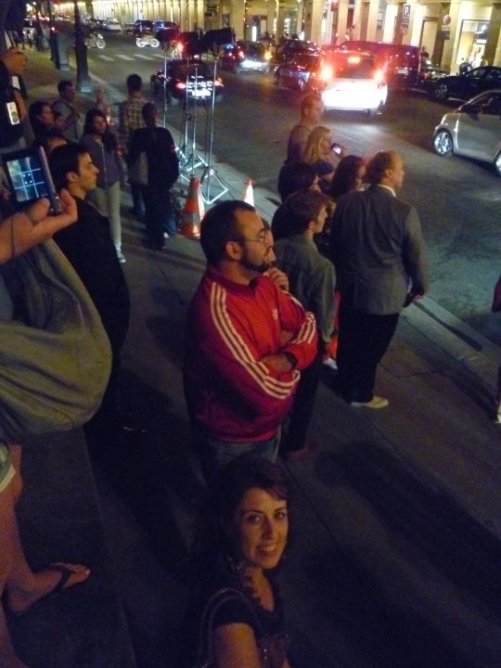 Our initial view, from across the street 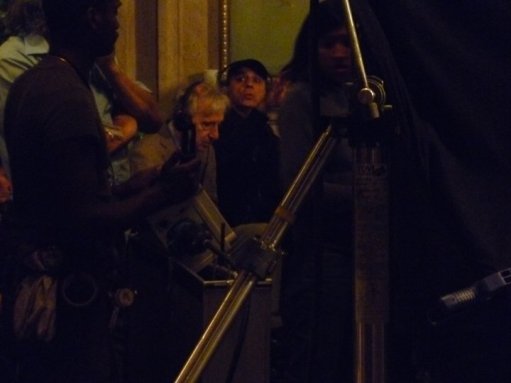 The Master at work 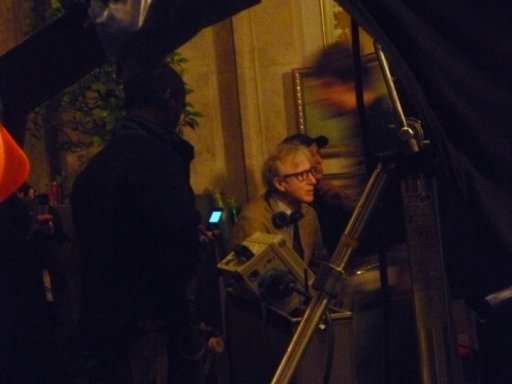 Watching Woody Allen work was one of the most magical moments of my life , no less 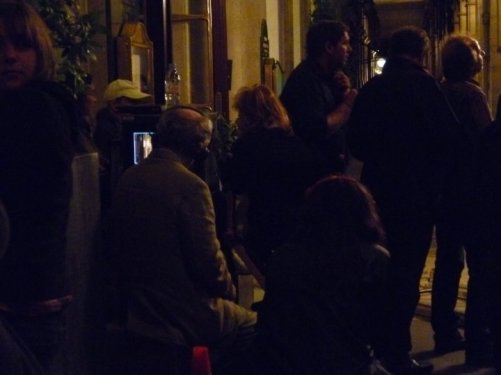 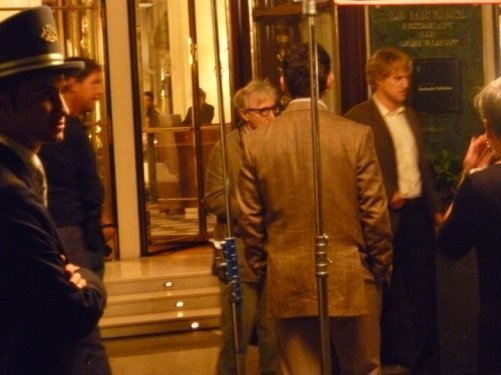 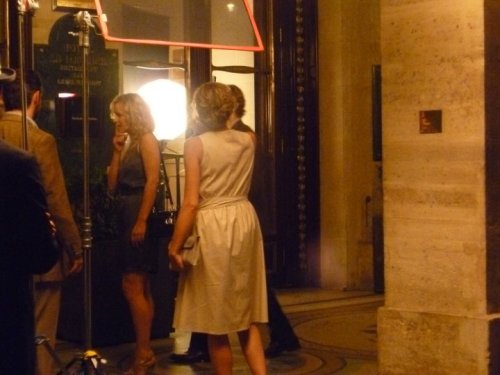 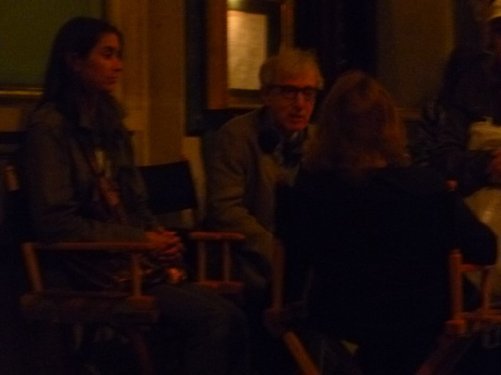 The following year I see the film released and in cinemas. Another masterpiece

5 Comments on Magic at Midnight, in Paris with Woody Allen and Owen Wilson