The Exit detail is handy to know, but in the case of an emergency, I only have 2 plans of action:
1.Panick
2. Say a last prayer
Cathay Pacific staff were very attentive & polite. Hong Kong airport had practically 95% of people wearing masks and i wondered if I should put mine on since I did bring one, but no, God wouldn’t give me swine flu before this much anticipated trip…..afterwards He could do what he wanted but before… I couldn’t believe He’d do anything to ruin it.
It was nice to NOT watch any childrens programming for once! 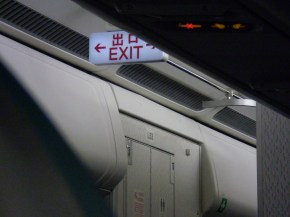 After 11hrs of continuous flight, waiting at Hong Kong airport wasnt so bad…

I realised this was the longest I’ve gone without doing any housework or being asked to do anything by anyone. These planes could delay their flights all they liked, I was already in a state of relax!

10 hrs or so to get to Finland from HK……Why does Australia have to be so FAR from the world?! It feels like we’re on another planet.
Finally in Helsinki, all my mind can focus on are those boarding times & the tunnel…. through which i throw myself with abandon falling into & through them like Alice on her way to Wonderland.
Falling from down under into a world completely unlike my own. It was a VERY long flight with heavy turbulence most of the way.
Goodbye Australia, Bonjour France.